Every Believer Needs A Eureka Moment

Ephesians is loaded with truth, and there is just one word that I want to focus on to amplify the title above. But first, let’s look at the “address on the envelope.” Ephesians was definitely written to Christians: “to the saints who are in Ephesus, and are faithful in Christ Jesus” (1:1b ESV). Then follows the supposedly longest sentence in the New Testament, verses 3-14, telling us what God has already done for us and what we have already received from Him.

In verse 13 he tells us that when they heard the gospel, they “believed in him [Christ]” and “were sealed with the promised Holy Spirit.” Then in verse 15 he says, “I have heard of your faith in the Lord Jesus and your love toward all the saints.” So they were born-again, practicing Christians for whom Paul gave thanks (verse 15). They were “blessed… with every spiritual blessing” (verse 3), and God’s grace had been lavished upon them (verse 8). On top of all that, Paul had spent three years in Ephesus on his third missionary journey, and he taught the believers there constantly. 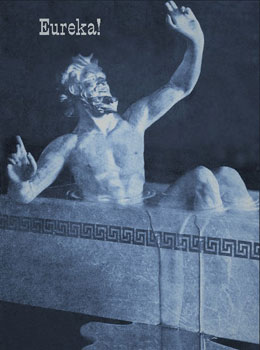 Yet when we get to verses 17 and 18, they apparently had yet to have a personal Eureka, an “ah hah!”, “light bulb” moment. Wikipedia calls it the “eureka effect… the common human experience of suddenly understanding a previously incomprehensible problem or concept.” Others use the term “insight.” Archimedes (c.250 BC) had his eureka moment in a bathtub when he saw the solution to the question his king had raised, and ran into the street naked shouting “Eureka,” (“I have found it”). Christians need insight to understand the depth of what God has already done them.

“I do not cease to give thanks for you, remembering you in my prayers, (17) that the God of our Lord Jesus Christ, the Father of glory, may give you a spirit of wisdom and of revelation in the knowledge of him, (18) having the eyes of your hearts [mind, imagination] enlightened, that you may know…” (Ephesians 1:16-18a). In the Greek culture, the heart is the seat of the understanding.

The word I want to focus on here is “enlightened,” Greek photizo, meaning “to shed rays.” It is in the Greek middle voice, indicating when the subject does an action to or for the benefit of itself. It can also mean an event in the past that is continuing in the present. There is no exact parallel in English, so there are some different views in the academic world on the best way to translate it.

The translation I prefer on this verse is the Concordant Literal Version, which reads, “the eyes of your heart having been enlightened, for you to perceive…” While these believers had everything they needed for anything they might ever run across, Paul’s prayer is that since God has given them enlightenment, they should do their part “to perceive” or “clearly picture” (Mirror) the wealth that is already theirs. It is a prayer for a “eureka moment” that they might really know three things (the three “whats” that follow in verses 18 and 19, see below) about the wealth and blessing they have as a believer in Christ.

“As the story goes Crowfoot, the chief of the Blackfoot nation in southern Alberta, gave the Canadian Pacific Railway permission to lay track from Medicine Hat to Calgary. He was given in exchange a lifetime railroad pass. Reportedly, Crowfoot put the pass in a leather pouch and wore it around his neck for the rest of his life–but he never once availed himself of the rights it spelled out. What a tragedy when believers do the same thing with the riches they possess in Christ, failing to really possess their possessions!” (preceptaustin.org).

We live in a day of the dumbing-down of the Christian. Some do read their Bibles daily, many only read their Bible on Sunday morning, and a minority actually study it. We should be shouting from the rooftop, “Get Back to the Bible!” This ministry is attempting, by our website and publications, to be a catalyst so that you can have your eureka moment. Every Christian needs a “eureka moment” to fully understand what God has given to them.

Let us look at the three things we need to fully understand. “(18b)…that you may know what is the hope of His calling, what are the riches of the glory of His inheritance in the saints, (19) and what is the exceeding greatness of His power toward us who believe, according to the working of His mighty power (20) which He worked in Christ when He raised Him from the dead and seated Him at His right hand in the heavenly places” (Ephesians 1:18-20 NKJV). Underline the three “what’s” in your Bible.

Ask yourself whether you really know those three things and you will discover whether or not you have had a eureka moment. If not, read Ephesians every day for 21 days (it will take about 20-25 minutes) and keep your mind tuned to God for your “ah-ha” moment, when you fully believe the integrity of God’s Word, that God means what He says and says what He means. — Peter Wade