Get Those Graveclothes Off!

Ephesians 2:4 is one of the most positive verses in the Bible. Set against a dark background (verses 1-3), the light of God shines forth. “But God, who is rich in mercy, because of the great love with which he loved us.” God comes on the scene and against that dark background makes a new focal point of something glorious. It is God who lifted us out of the graveyard of sin up to a very high place indeed.

Notice in verses 4-7 the repeated usage of the word “us”: “he loves us,” “made us alive together with Christ,” “raised us up with him,” “seated us with him in heavenly places in Christ Jesus,” and “the immeasurable riches of his grace in his kindness toward us in Christ Jesus.” Those pronouns are like footprints across the muddy flats of sin, rescuing us out of the graveyard and seating us at God’s right hand in Christ. Is that not something to shout about? 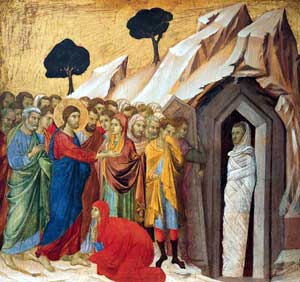 Raising Lazarus from the dead

God was too concerned about us to leave us as we were. God loved us, quickened us, raised us, gave us seating, and showed his kindness to us. I’m joyful that I’m tapped into his plan for my life. He was concerned for me, and so he did magnificent things for me. He lifted me out of that desperate, depressing, dark background of the graveyard into the graceyard — a place of light and love and life.

Let’s go back and look more closely at each of these steps. First, he has great love for us (verse 4). He loved us when we were unlovable, when we went in the direction of this world, when we were following the dictates of Satan, when we were dominated by the flesh. He loved us at a time when we didn’t care whether there was a God or not. No wonder it speaks of “his great love with which he loves us.”

Verse 5 says, “Even when we were

[not now, but in times past] dead in our trespasses.” To be dead in trespasses [or transgressions] is to be full of them, according to one commentator. That would seem to be an accurate picture of us in times past. A transgression is “a falling aside, when one should have stood upright.” Yet even when we were falling aside, God “made us alive together with Christ.” Now that is really something! In chapter 1 verse 20 it states that God raised Christ from the dead. Now in chapter 2 verse 5 it states that God, “Even when we were dead in our trespasses, made us alive together with Christ, (by grace ye are saved).”

“And raised us up with him” (verse 6a). When Jesus Christ was raised, we were raised. We were once dead in our trespasses, now we are alive in him! And to top it all off, God “seated us with him in heavenly places in Christ Jesus” (verse 6b). Get the picture in your mind — you and Christ sitting down together. When God raised you it was in order that he could have fellowship, companionship with you.

There were three persons that Christ raised from the dead while he was on earth, and one of them was Lazarus. In John 11 it is recorded that Lazarus died, and Mary and Martha, his sisters, sent word to Jesus to visit them. After Jesus had straightened out their thinking, we read, “And when he thus had spoken, he cried with a loud voice, Lazarus, come forth. 44 And he that was dead came forth, bound hand and foot with grave clothes” (verses 43-44a). Notice that even though Lazarus had been raised from the dead, and had left the tomb, he was still bound in graveclothes.

God could have removed those at the same time as He raised Lazarus from the dead, as he did with Jesus, but He didn’t because I believe He had a point to make. Jesus not only said, “Lazarus, come forth!” but then he said, “Loose him, and let him go” (verse 44b KJV). Being raised from the dead was not the complete procedure. Man had a part to play also. This is what I call a divine-human reciprocity! Jesus wanted Lazarus to enjoy life again to the full, so he told those who were there to unbind him.

In John 12:1-2 we read, “Then Jesus six days before the passover came to Bethany, where Lazarus was which had been dead, whom he raised from the dead. 2 There they made him a supper; and Martha served: but Lazarus was one of them that sat at the table with him.” Jesus raised Lazarus from the dead so that he could sit at his table and enjoy fellowship. It’s not enough to have the Christ life within, it’s not enough to be raised from the graveyard of sin and to be given seating in the heavenly places in Christ, but God wants us to enjoy it. “Unbind him and let him go…” Unwind the grave clothes covering up the New Creation within and enjoy life! God “has raised us up with him and seated us with him in heavenly places in Christ Jesus” (Ephesians 2:6). He wants our companionship; he wants to talk to us; he wants us to enjoy his company and presence, and to maximize our potential in this life.