“Who has rescued us out from the power of darkness and has transported us into the kingdom of his beloved Son” (Colossians 1:13). Thank you, Father! “God rescued us from dead-end alleys and dark dungeons. He’s set us up in the kingdom of the Son he loves so much” (Message Bible). 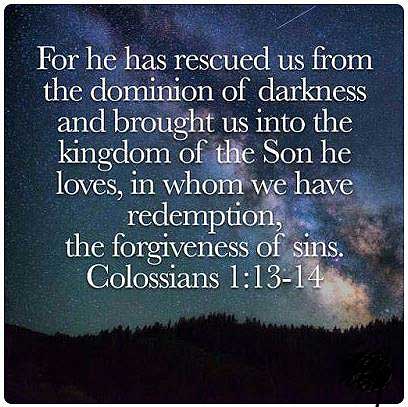 Now that is a powerful verse, and like all verses, we must see it in its context. The subject starts at verse 9 and goes through to verse 18. When you read through those verses you will see it is all about Christ: “And he is the head of the body, the church. He is the beginning, the firstborn from the dead, that in everything he might be preeminent” (verse 18). “… that God was in Christ, reconciling the world unto himself” (II Corinthians 5:19). So God was intimately behind everything Christ did on our behalf.

“Who has rescued us…” The KJV uses the “delivered” which is similar, yet the thought of rescuing us seems to give a more graphic word picture. The Mirror Bible uses “relocated.” Underline whichever word you have in your Bible. “… out from the power of darkness,” that is, out of the sphere in which Satan’s power is excercised. Are you starting to get blessed now. You’ve been rescued out of what is a foreign kingdom where you no longer belong. Remember Colossians is written to the “saints and faithful brothers in Christ.” So since you are in Christ as a result of your salvation, it applies to you!

“Out of,” and transported “into…” KJV uses “translated.” Underline whichever word you have in your Bible. No time delay there; it is instantaneous, immediate, less than a yoctosecond, the official term for the shortest lifetime measured so far by scientists. “… into the kingdom of his beloved Son,” or “His son that he loves very much.” Praise God! We’ve arrived, we belong, we hold citizenship. Isn’t that great!

Paul wrote in another letter, “our citizenship is in heaven, and from it we await a Savior, the Lord Jesus Christ” (Philippians 3:20, ESV and many others). The Greek word “citizenship” is only used here in the New Testament. I well remember my first passport after I became an adult. Our passports in the 1960s had the Australian Coat of Arms on the front cover and beneath it the words “A British Subject.” I rejoiced some 10 years later when I had to renew the passport, and those words were removed from the front cover and replaced it with the word “Passport.” Over 70 years after the nation was formed, someone woke up to the fact that citizens living on the continent of Australia were Australian citizens! So I hold dual citizenship: Heaven and Australia.

This favorite verse of mine would be a great verse to memorize, and an even greater verse to live by! — Peter Wade